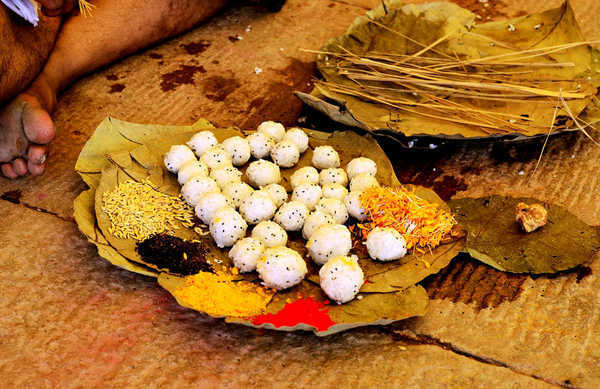 Gaya ji is called as Moksh Sthali where people from Hindu religion offer Pind Daan to their ancestors who departed from this world.

The ritual is performed by the children of the family and carried out by the Panda ji. By specific procedure and Mantras the souls of the ancestors are called at Gaya Ji Dham who are yet to attain Mukti after their death

Moksh is considered as Mukti from the birth, death and rebirth cycle.

How to Reach Gaya Ji Dham

Gaya is well connected by Airways, Railways and Road with rest of the country. The nearest Airport is Buddha International Airport, Gaya and the nearest railway station is Gaya Junction. However the most preferable way is Indian Railways. Gaya is well connected with State run roadways as well as Private Bus / Taxi operators. Train services are available to almost every prominent destination to the rest of India

What is Pind Daan

As per the Hindu belief with a death only the materialistic body dies while soul being immortal still remains attached to this materialistic world even after the loss of the body. As a result the soul can not detach himself / herself from this world. Being in the body less state the soul suffers immense pain.

Pind daan is a Hindu ritual known as the way of Mukti to the ancestors who departed. Mukti means Freedom from the cycle of Life and death & rebirth.

PIND DAAN is the process for the soul to achieve the relief from the pain and also paves the way for their onward journey to the ultimate world of Peace.

As per mythological story as depicted in Hindu scriptures Vayupurana, in relation to Gaya Mahatam, while creating human being, Lord Brahma created a demon named as Gayasur.

Though there is no concrete evidence since when the Pind daan started but it is believed Lord Brahma first performed the pind daan ritual in Gaya. Since then this ritual is being performed by millions of people across.

However Pind daan can be performed around the year but offering pind daan during the dark fortnight of Ashvin is of immense significance.

In simple terms the word pind means a body while the word daan denotes charity or giving. Therefore, pind daan means giving charity to the body of the departed soul.

Pind is a symbolic representation made of a mixture of oats and rice flour with some sesame seeds mixed along with some milk and honey. A total of seven such balls are made of 100 grams of flour. Of these, one is offered to the deceased and the rest to other ancestors.

Pitripaksh Mela or Pinddaan mela starts from the day of Bhadra Shuklapaksh (Anant Chaturdashi Puja) and ends on Pratipada of Ashwin Shuklapaksha according to the Hindi Calendar Pitripaksh Mela is very important for religious, mythological & historical aspects. Offering Pind Daan during the dark fortnight of Ashvin is of auspicious significance.

Ekodristi Gaya Shradha is a kind of TIRTH SHRADHA, completed in one day only at the three important vedis Vishnupad temple, The Falgu river (Niranjana, as mentioned in Ramayana) bank and Akshaybat ,

For a unusual/accidental death the pilgrims have to also perform Pind Daan at PRETSHILA (hill), Gaya kup and Dharmaranya also.

Mantras are used to invoke such souls who are having certain unfulfilled wishes. The ritual makes the soul to possess the artificial body and the funeral frees them from this materialistic world.

Naag Bali Shradha is performed to get rid of sin of killing snake, specially Cobra (Naag) which is worshiped in India. In this ritual also the funeral is performed on the body of snake made with wheat dough and metals.

Tripindi Shradha is performed in the memory of the dear ones departed. It is believed if the offerings are not made for three consecutive years, the departed ones get Pret Yoni,

This religious act is performed at a holy place meant for demon liberation or sacrifice. In Hindu religion Lord Brahma, Vishnu and Mahesh are the three main Gods in this rite.

There are total of 54 Vedis where Pind Daan is to be performed. However the most important Vedis are Vishnupad temple, The Falgu river bank and Akshaybat

Once Pind Daan is performed at Gaya Ji, the ancestors attain the Moksh and free from hell and goes to the Heaven